Publisher: Pan, an imprint of Macmillan

Get your own copy from Book Depository, Kobo, Amazon or directly from the Publisher

SYNOPSIS: “Welcome to Gideon Davorin’s Traveling Sideshow, where necromancy, magical visions, and pyrokinesis are more than just part of the act…

Mara has always longed for a normal life in a normal town where no one has the ability to levitate or predict the future. Instead, she roams from place to place, cleaning the tiger cage while her friends perform supernatural feats every night.

When the struggling sideshow is miraculously offered the money they need if they set up camp in Caudry, Louisiana, Mara meets local-boy Gabe…and a normal life has never been more appealing.

But before long, performers begin disappearing and bodies are found mauled by an invisible beast. Mara realises that there’s a sinister presence lurking in the town with its sights set on getting rid of the sideshow freeks. In order to unravel the truth before the attacker kills everyone Mara holds dear, she has seven days to take control of a power she didn’t know she was capable of—one that could change her future forever.”

DISCLAIMER: I was kindly supplied with an ARC of this book by the publisher as a part of a blog tour. All opinions and points of interest discussed are my own. That being said, this review may contain small spoilers, so read at your own discretion.

Now that I’ve finished, I feel like the book I was promised from the synopsis isn’t the one I received. By no means was this a particularly bad novel, it just doesn’t accurately reflect the story I wanted. From the synopsis I figured it would be a sort of dark and mysterious thriller, with a lot of action surrounding the disappearances and killings, however, I found it to be more of a romance with a supernatural twist. The main point of intrigue for me was missing, which definitely hindered my experience, but nonetheless, it was still enjoyable.

As you can see in the synopsis, this novel surrounds a travelling sideshow fighting for their safety from a mysterious beast plaguing their campsite. Mara, the slightly irritating 19-year-old protagonist who is a carnie that helps set up the main attractions, is a regular girl in a group full of supernatural beings (well as normal as you could be in that situation). Her mother is a necromancer who is trying to protect Mara from a life communicating with the spirits, which has led to her grandmother’s mental instability. With that in mind, from the moment the group rolls into Cauldry, a small town in Louisiana, Mara is overcome with an intense coldness from within which she palms off as nerves. When they are paired with reoccurring nightmares featuring a faceless woman screaming in an ancient language, something large and supernatural may be the root of her problems. Along with her problems at the sideshow, she meets a boy named Gabe who she has an instant and deep connection with. From the moment she meets him she feels slight unease, and the two go on a journey of self-discovery as well as trying to control the monster that has an unknown link to his family.

What I absolutely loved about this was the fantastical elements weaved throughout! Hocking created such a diverse cast of characters and supernatural beings including acrobats with the ability to levitate, a magician that can see into the future and sense other supernatural energy sources, and an assistant that can move objects with her mind. All the characters were beautifully crafted and the world is so rich and complex, which she established in such a short time period. Nothing she included was particularly unique and something I haven’t seen before, yet somehow she managed to give it her own distinctive twist which was highly enjoyable!

Despite being YA there was definitely a few scenes that I would class as NA, if ya know what I mean. The main genre is definitely difficult to pinpoint as it a mixture of such drastically different themes. There is romance, murder, violence and an overall sense mystery which I believe lead to the story being far to confused with what it was trying to achieve. Each chapter seemed to have its own unique genre which created an unconnected story. I found there to be a few plot holes surrounding Mara’s relationships with her fellow carnies and Gabe, which I would’ve appreciated being answered instead of the countless angsty spiels about her love for the boy she could never be with. The writing wasn’t divided evenly between all subplots, which has decreased the level of enjoyment.

The whole story was leading up to an epic conclusion, which kept me reading in anticipation, but I left completely underwhelmed and disappointed. From the beginning of the story, the mystery monster attacking the members of the travelling show was written perfectly; just enough detail was released that made you crave answers. As the story progressed so did the power and brutality behind its attacks which kept me on the edge of my seat, yet the final fight was over in 10 pages! Hocking tried to cram too much into the fairly short story which distracted the reader from the final sequence. I would’ve loved a larger and more inclusive ending with the beast purely because it had been such a large nuisance and plot point. I just needed closure and I am definitely not satisfied that such an unruly beast could be eliminated so easily; it doesn’t make sense to me at all.

The thing I really couldn’t wrap my head around was the relationship between Gabe and Mara. In the time she was in town, their relationship evolved into something that was highly unrealistic. The pair only had a few dates at the sideshow which wouldn’t have lasted more than 5 hours, yet they were in love. He even admitted he liked her after two days of knowing her, which might I add, would raise a few red flags in real life! I get that they had an instant and deep connection, and wanted to make the most of the 10 days they had together, but real life relationships aren’t like this. After a week it’s even mentioned that she should consider staying in town with him rather than following her family, friends, and entire life to their next stop: that’s just not normal for two sex driven teenagers! While I’m on this topic, she was overly “in love” with this boy. Her adoration was obsessive and frankly, borderline creepy. Her campsite was under attack from a mysterious monster attacking her family and one of her god damn friends were missing, but still, Gabe was first on her mind! She really needs to sort out her priorities. 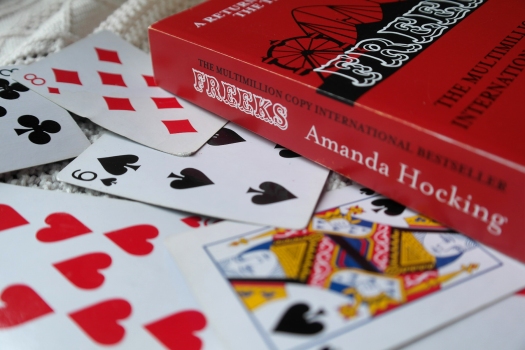 Overall, this was the perfect introduction to an author I have heard so highly of in the past! The novel was in interesting take on a genre that is explored so regularly because she gave her own unique twist to it. I recommend this to lovers of supernatural beings and those who love a quick and simple fantasy, who don’t mind a little bit of romance. Hocking definitely created a novel that will be well loved by YA readers!

Have you read this book or are thinking about picking it up? Tell me in a comment down below, and I’ll see you next time!